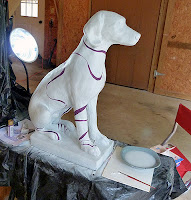 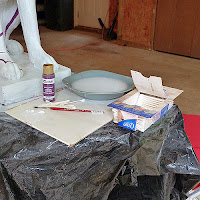 Starting work on a dog statue, now named "Chance" that will eventually be auctioned off at the "Dogs and Cats Around Town" Charlottesville Area SPCA.

Critical things needed to do this kind of work: a very steady hand and a very good brush.

It's a truism that this kind of work often looks much easier to do than it is. After wielding brushes for many years, I can tell you that practice is essential before you start the final work. Judge how easily the  brush becomes "loaded" or filled, with paint. Then, glide it across a practice surface similar to the final piece. I actually went outside and got some rocks, which really helped me understand what paint consistency was best, and how fine or thick a line I could easily make.

Spend some time stroking away and realize that no matter how much you practice, when you get to the real, final work you're bound to make some mistakes and you'll relax as you move along. Mistakes? Later I'll show you some custom-made mistake erasure paint. Not that I ever make mistakes. Ever.

On this particular statue, because I can't move it (150+ pounds?) I became a contortionist. I'm right-handed, which means my most controlled stroke is from left to right. Just imagine how I had to move around the statue - crouching, sitting, bending, leaning - to get the straightest, most beautiful thick and thin strokes. That was about 3.5 hours of painting and yoga!

To get clean, thick and think strokes, I had no caffeine, lots of patience and a pretty expensive Dick Blick Masterstroke Kolinsky Sable #4 brush. The acrylic paint brand is "Folk Art" for projects like this, and was purchased at Michael's. The colors are all liquid and pre-mixed, so I knew exactly what I was going to get.

And the Q-Tips? One of the most essential tools in my magical box. I dip them in water and can easily wipe away errors in the finest details.

Chance will be standing in front of the Happy Cook this summer, so the colors I've chosen reflect some from Happy Cook place settings that were just beautiful. I started out with multiple layers of Krylon Primer followed by Satin White Paint, also by Krylon, also from Michael's.

One note: I plan to spray the entire dog statue with a semi-gloss clear acrylic sealant when it's finished. Until then, I'm careful not to rub up against the colored paints.

Posted by Catherine Twomey at 3:38 PM