Huckstep's Garage Redux And Beyond 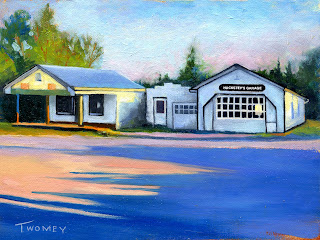 Just finished this latest rendition of Huckstep's Garage in Free Union, VA. This was commissioned by the person whose father actually made the "Huckstep's Garage" sign on the right. This iconic set of buildings just sold, and I'm hoping beyond hope they won't be razed, but rehabbed instead.

This almost brings to an end a large number of commissions I've been working on since October. There's a sea change coming as well. Meaning, I'm feeling an overwhelming need to paint in a vastly new way.

Representational is good. But of late, however, it's not been enough. Having "done" representational and accurate forever, I need to dig deeper and see what's there. There's this unavoidable need to move beyond and into a previously untapped expressiveness. That, I think, will be the next step, and as per usual, I'm gung ho to get going. Look out! No promises being made, but a deluge of energy pouring forth.
Posted by Catherine Twomey at 9:16 AM