"Everything About Hawaii" by C. Twomey

On offer HERE. This original, under glass, framed watercolor shows everything that's wonderful about Hawaii. I painted this on a glorious afternoon where the less was said, the better. Size is 7 X 3.5", including the frame it's about 9.5 X 5.5. Ready to hang and add to your collection.
Posted by Catherine Twomey at 6:44 PM No comments: 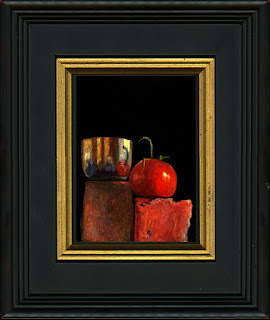 An original, custom framed still life up for sale showing the spectacular reflections of a Jefferson Cup. There was something so delightful in the stem of the tomato reaching for the cup. If you look closely, there's a self portrait also reflected as I intently focused on the alla prima work at hand. The painting itself is 5 X 7", the frame is highlighted with a inner antique gold border and makes the final painting about 9 X 11". It is signed and ready to hang.


Just posted the above image up for sale in my Shop. Maybe a play on words & images, but it is a time for reflection.

For as long as I can remember, I have wanted and loved horses. There was no family equine history; no ponies for birthdays - just an intense desire to learn and love them. My mom would always tell people she had no idea where I came up with the addiction. My dad would tell me I could get a horse when we quit paying taxes (!).

Many people think that those who have horses are wealthy. In some quarters, this may be true, but most horse people I've known over the last 30 years put all of their hard-earned time, love, energy and money into their equine passion. I've been one of those people. It hasn't been easy as I started later than most and had to learn thru thick or thin.
Over the years I've been lucky enough to own three horses and lease one. They were all wonderful, each with their own strengths and personality who never stopped giving no matter what I asked.
I am now horseless, in a new albeit very horsey state. I thought I would immediately pick up where I had left off with those magnificent animals. Odd thing, though, is: the thrill seems to be gone.
It's a hell of a sport. It's dangerous, expensive, time consuming and for the young. I have known two people who've been killed, two who were paralyzed from the neck down and countless friends that have been kicked, bitten, stomped on, run away with and so on.

At the same time, I've gained confidence, extraordinary balance, soft & kind hands, good horsey friends and the intense unconditional love only an animal can give a human.
It feels like time for a break. Or possibly a recognition that how I felt once can change; or subliminal denial has finally been allowed to surface front and center.
What I do notice most, however, is a sense of relief at having more time and energy to create. Here goes. Posted by Catherine Twomey at 3:54 PM No comments:

"African Shell and Rock, In Conversation" On Offer Now

Found this wonderful Sedona red rock outside the studio one day, the same day I found this smooth, pearlescent African shell in a mystical mysterious Sedona-type shop. This original oil is 5 X 7", painted alla prima (in one sitting) unframed, on archival linen board.

Still Living Momentarily
Have you ever gotten away from what you know makes you really, really happy? Or maybe you didn't know it at the time because you took whatever it was for granted, like breathing.
For the longest time I thought the way to life and career happiness was a fancy office at an important company, wearing the latest clothing styles and reaching for ever more precious things to buy; or equally precious people to know.
Funny, but I got there. I had that New York City job and office, with an impressive title to match. It wasn't easy, especially for me being a small, quiet person with a big heart in the Big Apple. But gosh darn it - for a short while, I thought that was all that was needed for A Perfect Life.
I was a managing director of interactive multimedia for an enormous medical ad agency. The digital revolution was on full force in the '90s (first Mac: 1978) and I thought I wanted to be in the middle of it. And so I was, for many years. Oh, the stories I may tell.
The thing about nagging sensations, however, is late at night, when you're trying to sleep, they rummage through your head. The tough wall of denial starts to crack as it slowly dawns on you that maybe what you thought you wanted wasn't what you needed at all. You finally feel a pressing need to get back to what used to make your world joyful.
And so I did.

Posted by Catherine Twomey at 3:58 PM No comments:

"Indian Horsehair Vase & Lemon; A First Meeting" Up For Sale

This is an oil of a cherished American Indian made horsehair vase, painted with a fresh slice of lemon. This is the official documentation of their first meeting; an auspicious meeting in Sedona, Arizona where I spent a joyous week painting with fellow artists. 5 X 7" oil on archival RayMar Linen Board. Unframed.

Still Living Momentarily
Don't know quite why this is on my mind. Maybe since I just moved 3,000 miles, from Virginia to California.

When I was a tiny kid, I have vague memories of picking up the phone off the wall in our kitchen in Naperville, Illinois, knowing my mom was on the extension. I don't remember knowing how to turn the dial to get numbers; maybe that hadn't even been invented yet. I could hear multiple chattering, somewhat familiar voices, which suddenly stopped when my phone clicked on. A dark pause led to my mother admonishing me to hang up the phone, please. Of course I did.

Those were party lines; mid-fifties. And party those women did with that new fangled machine, able to gossip easily, locally and with many households all at once. Somewhere in an AT&T or Ma Bell building, another woman sat at a huge console, plugging-in and linking wires so the neighborhood could run rampant.

Here we are, 3,000 miles from where we were a month ago and half a century from that memory. My iPhone 5s made the journey too. It has so many magical things it can do, I've only learned to use a fraction. Maybe it too can party-line, but what women now sit around the house and have the time or energy to gossip?

I didn't even have to change the number to use it in my new-found paradise, though some people ask why I have a Wisconsin area code (from two moves ago).

Imagine.
Posted by Catherine Twomey at 1:30 PM No comments:

Had a nice write-up on emptyeasel.com - glad to have found it and grateful for the thoughtful prose:

Catherine Twomey: Diverse Paintings in Oil & Watercolor
Catherine Twomey’s artwork depicts who she is at the moment, and the fact of the matter is her interests are ever changing. So, it makes sense that her artwork spans from still life to landscapes to animal portraits—and then some!
EMPTYEASEL.COM

Posted by Catherine Twomey at 3:39 PM No comments: